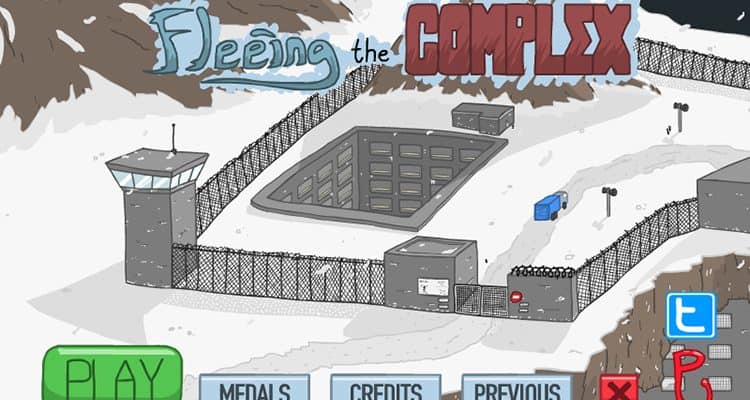 A few years ago, stick figure games were all the rage. Popular gaming sites like Newgrounds were chockful of user-submitted, creative stick figure games. Both entertaining and easier to develop and design, they were being played by millions.

And the start of this massively popular fad? None other than Stickpage’s stickman series games featuring Henry Stickmin.

The most popular of these is Fleeing the Complex, a fun choose-your-own-course game that is still widely played by millions worldwide.

Fleeing the Complex is a completely free game. It’s available online and can be played in- browser, making it easy on memory usage.

The game is short, fun and loads quickly due to its simple stickman animations, backgrounds and characters. That’s not to the say the game is not beautiful: considering it’s a stick-figure game, it’s extremely well developed and designed, with interesting and attractive levels and smooth animations.

This is one of the simplest games to play and understand. The character is locked up in a prison cell and has one goal in mind: escaping. It’s your job to get him out of there by making all the right choices. Make the wrong choice and the character will die in creative and unexpected ways.

Each ‘level’ has a variety of options to make, and each option will influence the next path in the game. For example, if you help your cellmate, the entire plot of the game changes versus getting through the levels alone. That makes the game feel like new numerous times. Each time you play, there may be completely new choices available to escape!

The choices are always amusing and creative. They involve tools like dynamite or even creating a dancing distraction. Some things work, others don’t. If you’re caught by the guards, you made the wrong choice.

The animations of all the choices’ consequences are also stellar. They are funny and flow smoothly with the gameplay. All the characters, including the stick-figure guards, are amusing and silly.

Fleeing the Complex is a fun & short game, perfect for killing some time. Once you play, it’s easy to become a fan!

How to Get Better at Video Gam...

The average gamer spent around 16

How to Market Your Blog Throug...

The process of marketing a

How Are Key Holding Services B...

There are many critical aspects