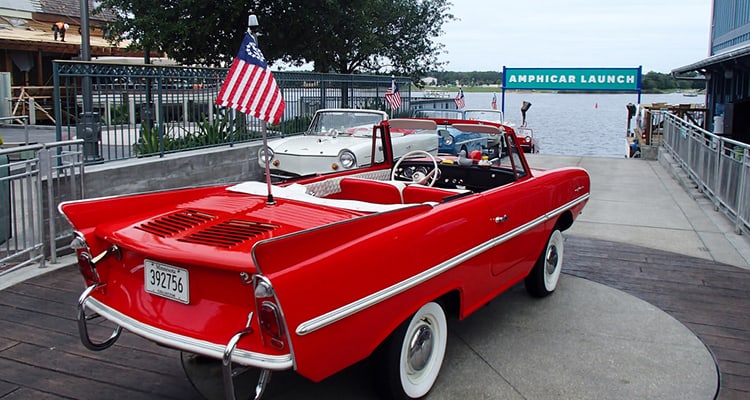 In the 1960s, a very unusual car was built by the Quant Group in Germany. Called the Amphicar, it could actually be driven on the road and then right into a body of water to function as a boat. It was a true amphibious car. The Model 770 Amphicar was designed to be sold primarily in the United States but was offered in several other countries also. To be fair, it wasn’t a particularly great car nor a great boat, in fact, an anonymous Ampicar owner was quoted “It’s not a good car and it’s not a good boat, but it does just fine at both.”  As it turned out the car wasn’t taken very seriously in the United States. Only 3,878 ended up being produced by the time it ended its production run in 1965.

Mounted at the rear of the car was a 1147 cc, four cylinder engine from the British Triumph Herald 1200. The engine drove a 4-speed manual transmission which was connected to the rear differential and rear wheels. When the Amphicar was in the water, the same engine drove a pair of reversible propellers at the rear of the vehicle. The way it functioned was like this: when the car was in the water, the main gear shift would normally be left in neutral and the driver would engage the rear propellers with a special lever. When approaching a boat ramp, by engaging the car’s first gear as well as the drive to the propellers, the Amphicar could actually drive itself out of the water.

The Amphicar could achieve speeds of 7 knots in the water and 70 mph on land. Later versions of the engine displaced 1296 cc and 1493 cc and produced up to 75 bhp. When in the water, the vehicle was steered by the car’s front wheels, making it quite a bit less maneuverable than a conventional boat. This was a point that was complained about by many journalists.
Sales

Most Amphicars were sold in the United States but 99 right-hand drive models were made and sold in Britain.  Some Amphicars were sold to the Berlin police department and fitted for rescue operations. Today, the Boathouse at Disney Springs at Walt Disney World in Orlando, Florida has several Amphicars that guides will use to take visiting patrons out for rides

Amphicar production started in 1961. Inventory was built up in anticipation of sales of 20,000 per year but production ended in 1965 with just 3,878 vehicles being sold.

We heard this great story from the service manager at Sheridan Nissan in New Castle, DE, a full-service Nissan dealer. Apparently in the 1970s, President Lyndon B. Johnson had an Amphicar.  He was said to enjoy frightening visitors at his Johnson City, Texas ranch by driving them downhill in his Amphicar, directly into his property’s lake, all the while shouting that the brakes had just failed.

Today, Amphicars are prized as collectible automobiles. There is a very active Amphicar restorers club on the internet and they work hard to keep the breed alive.

Building Your First Home: A Gu...

Whether you plan on purchasing