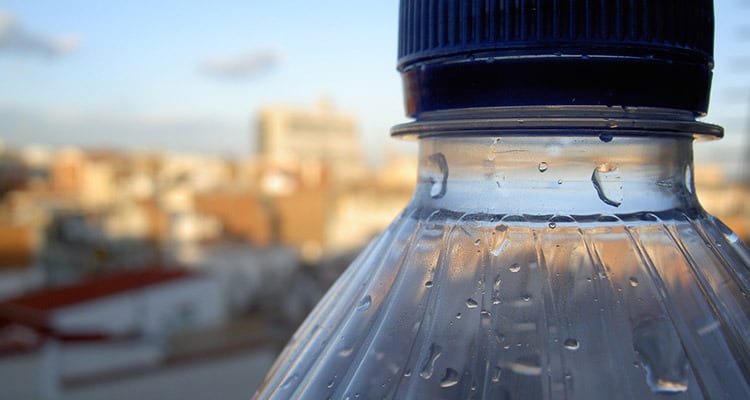 Plastic objects fill our world and the potential for goods made from plastic fabrication is almost incalculable. Plastic is eminently versatile and light-weight and can be extremely useful in a range of different ways.

However plastic is also a polluting force. Bottles and bags are scattered throughout the world carelessly discarded by people who don’t realise or who don’t think about the damage that plastic litter does. As it slowly decomposes over hundreds of years plastics give off toxins that pollute the earth. They are also a danger to wildlife and simply dirty up wherever they lie.
So it is relieving given all those negatives when you hear of people doing something useful with plastics beyond their original use. Re-utilising plastics in imaginative ways to construct new inventions is something people around the world, including the guys at Arcola Products, have started to do in order to tackle the plastic crisis that the world is facing.

Take Linda Woollard for example, a 68 year old grandmother and student at the University of Lancashire. This unexpected inventor developed and ingenious design for a greenhouse while working on her masters program at the University. Her greenhouse is constructed entirely from 1400 re-purposed plastic bottles, giving these discarded objects a new use. However that isn’t the most amazing thing about her Greenhouse. What is most impressive is that she also developed a design by placing the bottles in certain positions which allows the greenhouse to water itself. They way that the bottles are placed in the greenhouse allows small drops of water through the structure to fall on the plants inside.

Another inventive pensioner who has found another use for old plastic bottles is Joe Alano, a retired mechanic from Brazil. Joe saw the incredible amount of plastic bottles and cartons that were left lying around in the streets and devised a creation which tackles this problem as well as providing an interesting twist on renewable energy sources. Using 100 plastic bottles and 100 milk cartons he designed solar panels that are cheap and relatively easy to construct. To read more about both of these inventions have a look at Urban Gardens
Akinori Ito, a Japanese inventor, is another man who sees great potential in plastic even when its original use is done. Basically Ito came to the conclusion that if plastic bags are produced using oil then surely they can be broken down again and converted back into fuel. So he developed a machine that does just that. The machine he came up with is actually surprisingly efficient too converting about a kilo of plastic into a litre of fuel for the cost of about $0.20. Unfortunately the machine that makes it is still expensive to assemble though Ito hopes that mass production will bring down the cost.

Finally the most incredible invention listed here is surely Starlite, which has actually been in existence now for almost 30 years. This incredible plastic material has been tested to resist the strength of 75 Hiroshimas without getting much more than a scratch. It can resist and even stay cool in temperatures that would instantly vaporise almost anything else on the planet. The potential for its usage as a fire retardant and an almost indestructible protective force is massive. It’s inventor, the 76 year old amateur scientist Maurice Ward, has been courted by countless companies and military institutions throughout the world, even NASA were trying hard to get their hands on it for years. So why isn’t Starlite a household name used in countless daily products? Well you should read the full, incredible story to know why.

First and foremost, I know