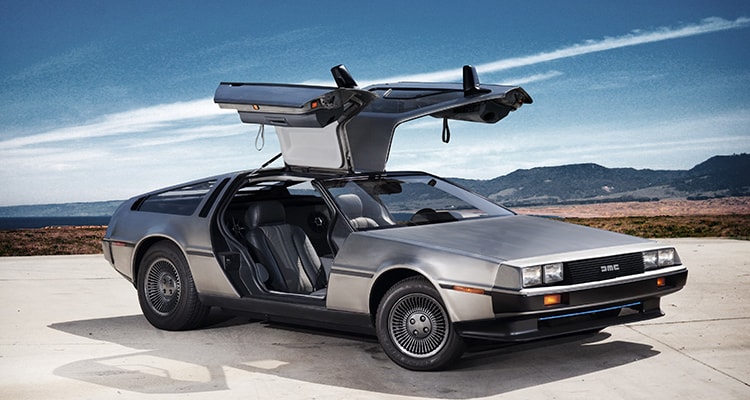 Can you tell me about the DeLorean automobile’s history?

Yes! Have you ever seen Bob Zemecki’s 1985 movie Back to the Future? In the movie, the car is turned into a time machine by Dr. Emmett Brown, one of the film’s main characters. Besides the vehicle’s leading role in Back to the Future, not many people know that there is a big history behind the DeLorean DMC-12 and, as you may suspect, it revolves around its creator: John Z. DeLorean. Here’s the history.

In 1925, John Z. DeLorean was born in Detroit. When he was young, DeLorean tinkered with almost anything he could get his hands on. After high school he became a student at the Lawrence Institute of Technology and later obtained a master’s in engineering from the Chrysler Institute.  After graduation, he worked for Packard for a while but soon departed for a position at General Motors.

DeLorean did very well at GM and moved up the corporate ladder at a fast pace. However, DeLorean had a tough time at the top. Part of why is that the 1970s were hard times in Detroit. DeLorean in his autobiography, DeLorean, wrote that the business and ethical problems he had with General Motors and the way they conducted business had become so ridiculous, that he wanted out.

DeLorean’s work brought him to the well-paid independent consultant life that let him raise funds to build his dream car. In the quest of establishing his dream car company, DeLorean started up Composite Technology Corporation (CTC) in 1974. CTC was developed to experiment and make new, cutting-edge automotive construction materials.  Many of the materials were based on DeLorean’s projects at GM that made use of exotic construction techniques and composite materials.

Then DeLorean founded The DeLorean Motor Car (DMC) in 1975, which let him build his first dream car: the DMC-12. DeLorean chose Northern Ireland to build the factory to make his DMC-12 cars. This factory formally opened in 1981. The first 70-80 cars to come off the assembly line were so terrible they were left, unfinished, along the factory fence for weeks while workers came up with reworking processes. DeLorean opened facilities on the West and East Coasts of the United States just to fix completed cars before they headed to dealers.

In spite of these setbacks, though, the DMC-12 was quite popular and there were orders for thousands of the vehicles. DeLorean soon tried to ramp production up to 14,700 per year to meet demand.

However, cash flow problems soon presented themselves. In 1982, DeLorean pursued “questionable sources of funds” to keep the company in business and ended up in a quite interesting DEA cocaine bust, a world-wide news event. He was found not guilty of all counts by 1984, at which point his car company was gone.

Thanks to: Thompson Toyota

We should all be familiar

Levelling Up: How to Succeed i...

If you’re a young, hungry,

How Can Operational Readiness ...

Every business startup is surrounded