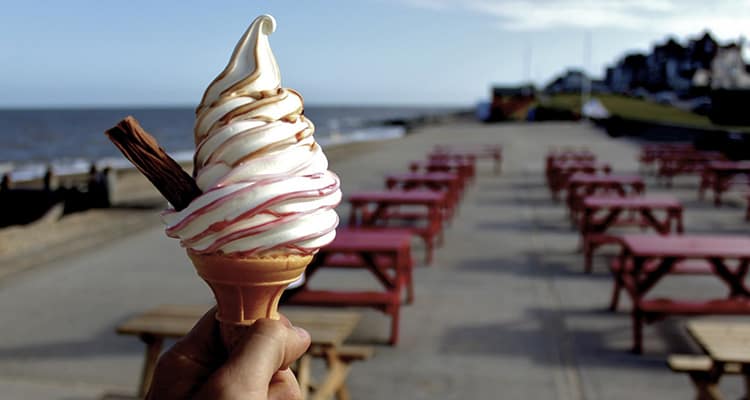 A Brief History of the Ice Cream Truck

It all started with push carts.  At late 1800s, dozens of vendors in major cities sold ice cream out of ice-filled push carts.  The technique they used was to scoop a little ice cream into a small ceramic dish and hand it to a customer with a spoon.  After the customer finished the ice cream, the dish was then returned to the vendor, who wiped it down and loaded it up with a fresh scoop for the next customer.

At the 1904 World Fair in St. Louis, a portable ice cream container premiered— the ice cream cone. The thin, crispy waffles that ice cream cones were made of weren’t new.  They had long been a contemporary dessert favorite. The novel concept was to make them into a cone and scoop ice cream into it so the customer can eat the ice cream and its “container.”  According to legend, several vendors who sold concessions at the 1904 fair “introduced” waffle cones at the fair and since then they have fought for recognition as to who was the true creator of the first ice cream cone.

The rise of the public’s interest in ice cream was also timed with technological advances in refrigeration . In the early 1920s, large electric refrigerators existed but small ones were just being developed.  With a small refrigeration unit, street vendors could keep ice cream cold without using buckets of ice for the first time.

And an interesting cultural thing occurred at that time too. The early 1920s saw the start of Prohibition and the end of easy access to the wine, beer, or spirits. For many Americans, the comfort of delicious ice cream replaced the indulgence lost with banned alcohol. The result was that the popularity of ice cream parlors soared during this era as well as the ice cream cart vendors.

The first ice cream truck was credited to Harry Burt of Youngstown, Ohio, who was the creator of the Good Humor brand. Burt was already delivering ice cream from a motorized vehicle when he had the idea to build a special dedicated ice cream truck.  This would be the perfect vehicle to sell his new invention:  chocolate-covered ice cream bars on a wooden sticks. He called these “Good Humor Ice Cream Bars and they were a hit. The Good Humor name came from the belief that a person’s “humor,” or temperament, was related to the “humor of the palate,” obviously an old phrase.

In the 1930s, ice cream sales dived due to the great depression but ice cream trucks such as Burt’s Good Humor brand where able to survive the due to the product’s low-cost. Many consumers couldn’t afford tubs of ice cream, but they could afford a nickel for an ice cream bar.

But the great depression finally ended and after a few decades, thousands of Good Humor men patrolled the nation’s neighborhoods, becoming part of the communities they served. In 1965, Time Magazine reported, “To the young, he [the Good Humor man] has become better known than the fire chief, more welcome than the mailman, more respected than the corner cop.”

Just what is the appeal of an ice cream truck? Whether they’re vintage or modern, they have a seductive allure that’s about more than just ice cream. They summon up a particular kind of nostalgia—the sense of freedom that comes from carefree summer days;  the thrill of having some money in your pocket and a long list of frozen treats from which to choose.

The Innovative Technological a...

Voice over IP or VoIP

Customise Your Smartphone With...

The iPhone 6 is an

For a successful business plan,

An Introduction to Hyundai Blu...

Every purchase of a new