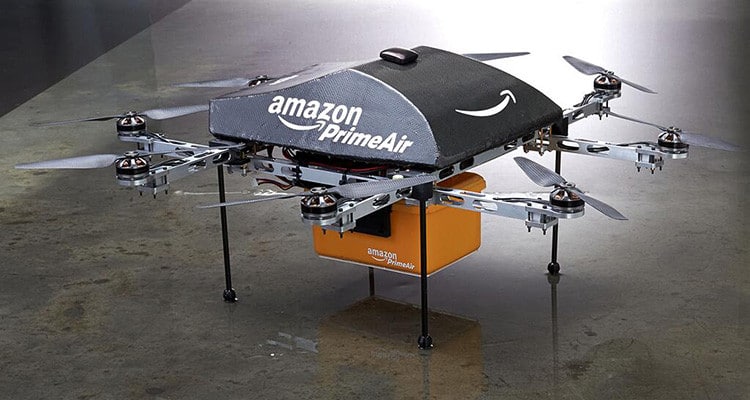 Amazon Prime Air – Are They Being Serious?

You know when films and TV programmes, such as ‘Futurama’ or ‘Back to the Future’, always imagine the future with lots of robots, things that fly/hover, and humans becoming obsolete? Well it looks like Amazon’s engineers have been watching far too much TV.

Amazon Prime Air is the latest proposal from the world’s biggest e-commerce website. Drones that think on their own, fly and deliver Amazon packages, no human needed. They kid you not. Silverbean investigates:

These devices were unveiled earlier this month, but at the moment are still in the testing stages and won’t be delivering a package near you for at least several more years yet. So Amazon delivery drivers can sit tight. For now.

There is also the small issue of the fact that the FAA (the US Federation of Aviation Administration) currently bans the use of any unmanned aircraft in the USA for commercial purposes. This means Amazon, and any other companies wanting to use drones in their day to day business, will have to wait for the FAA to create a new set of rules and regulations to govern the use of drones for commercial purposes, for which Congress has set a deadline of September 2015.

But this isn’t dampening the spirits of the global retailer, as they continue to work excitedly on the most ambitious project of its kind ever seen. Technology has been in advancement for decades now, and at a particularly fast rate over the last decade, but commercial drones that deliver packages is by far the most advanced and complex proposal we have seen yet, making it a huge leap for technology.

And although it may seem like just that, an ambitious project with no real means of working, there are actually very few reasons stopping it from being a reality.

One of the main issues that are being worked on currently is navigation. Ensuring, for one, that Amazon’s flying bot doesn’t land on anyone’s head is just the tip of the iceberg. If the bot is to safely deliver a package to the recipient in one piece, it needs to be able to navigate a range of environmental obstacles from people to buildings, trees, etc. as well as making a speedy delivery, as Amazon promises the flying bots will allows packages to be delivered in 30 minutes or under.

There is also the factor of safety in terms of the drones reacting to failure before it happens, such as being able to quickly locate and land in a safe place if threatened. There is the potential worry of drones falling from the sky, colliding with traffic or causing traffic accidents, and of course, knowing where the best place to land is when it reaches its destination. These are all issues that are yet to be overcome, but with the pace of technological advancement, there are few fears that it will not achieve its goal in the next decade.

These are all issues that are yet to be overcome, but with the pace of technological advancement, there are few fears that it will not achieve its goal in the next decade. And with such a milestone looking to be overcome in the near future, it makes us all wonder what other wonders the not so distant future could hold for technology. Hover boards maybe?

The Impact of Cloud Computing ...

Cloud computing appeared as a

When it comes to running

Find the Right Office For Your...

The office you choose can